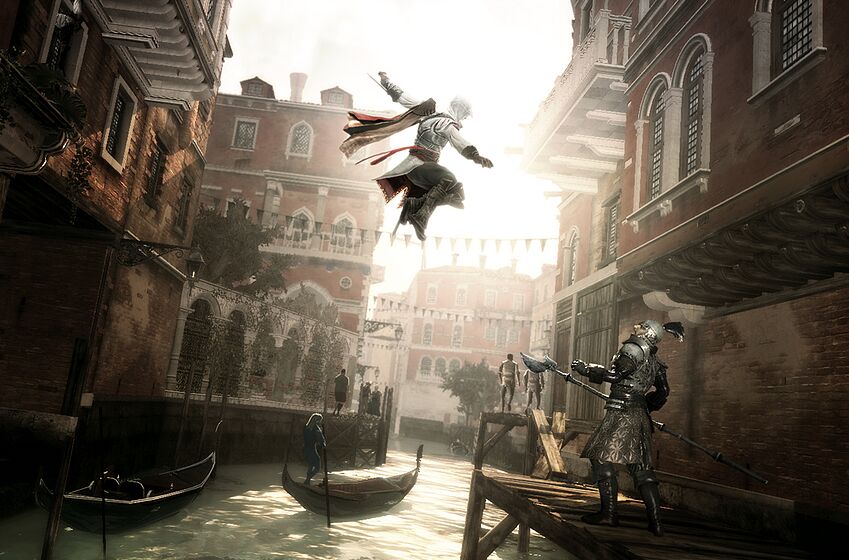 Oh, Ubisoft! How do your games continue to get leaked year after year? Assassin’s Creed is the biggest victim of this form of announcement. Leaks range from screenshots to keychains, but all of them are worthy of a facepalm.

A recent Amazon Germany product listing leaked the potential of an Assassin’s Creed game set in the Viking Era. A screenshot of the listing was posted on Reddit before anyone else could get their hands on the source. The screenshot reveals the alleged game as Assassin’s Creed Ragnarok. It has been heavily rumored the next installment would center around Vikings.

It is insane to think the first game of a series can leak, but AC did just that. The first installment released in 2007 but the leak came the year prior in a trademark filing. Assassin’s Creed received relatively good reviews among critics. The following sequel, Assassin’s Creed 2, made a larger splash and garnered better reviews. As aforementioned, it is the only AC game to not have leaked.

The Assassin’s Creed series has been leaked in various ways. Some of them are more ridiculous than others. Brotherhood found its way into the world via a domain name. Ubisoft registered two domain names at the time and one of them happened to be the next installment of their assassin franchise. If the AC franchise was a true assassin then it would be terrible at its job.

Ubisoft shouldn’t post or hint at an AC game. They may get another leak like the one for Revelations. The June issue of Game Informer was planned to reveal the game in its entirety, but NeoGaf forum members extracted date from a Facebook post. A Facebook post! They gathered data revealing the name of the next game. The community is a wonderful tool.

The employees at Best Buy cannot be trusted. Assassin’s Creed 3 was leaked from an image meant for Besty Buy employees only. An employee of Best Buy snapped a photo and sent it into Kotaku. The image is the promotional art of Conner, the game’s protagonist. Ubisoft cannot trust any retailer it seems.

Kotaku picked up another leak after Assassin’s Creed 3. A poster was snapshotted from someone who had received a poster of the protagonist, Edward Kenway. Edward is seen in the poster firing flintlock pistols and the name of the game is revealed. It seems Ubisoft should avoid any kind of marketing for their AC games.

Unity was meant to be a changing period for the AC series. The game featured many experimental concepts like cooperative play. However, the theme of leaking the game did not change. Unity was leaked to Kotaku again via screenshots of the game. It revealed the location, time period, the name, and the new mechanics within the game. In the same leak, Assassin’s Creed Rogue was leaked. At the time, the game was codenamed Comet. Comet was expected to release solely on the previous-gen consoles, which was correct.

Kotaku is the king of leaks because they received information and screenshots of Assassin’s Creed Syndicate. At the time, the game was speculated to be titled Victory. However, it was later announced the game was titled Syndicate. Syndicate was the last game Ubisoft developed before taking a year off.

Assassin’s Creed Origins was highly anticipated for a number of reasons. Firstly, it was the first game in the series since 2015. Secondly, the game was rumored to take place in Egypt. The information was leaked to Kotaku once more and screenshots followed soon after. Origins marked the new shape of the Assassin’s Creed franchise. Ubisoft switched gears and turned the series into an action-adventure RPG.

The silliest leak on this list is Assassin’s Creed Odysseys. Odyssey is the best game in the series but has the dumbest leak. A week prior to E3, where Odyssey was officially announced, an image of a keychain for the game surfaced online. The keychain was of a spartan helmet that fit rumors of a Greece setting. Who knew keychains could be so important in the speculation of a game.

Another Year, Another Assassin’s Creed Game